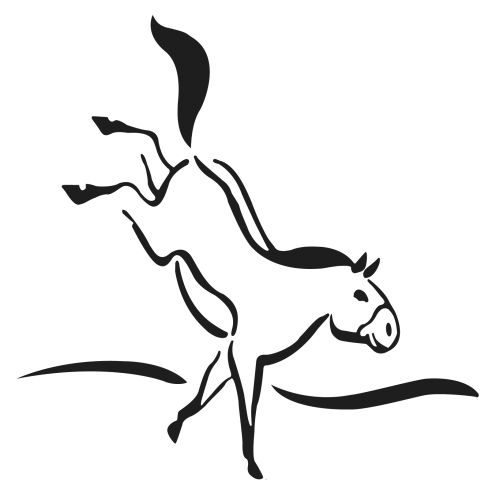 The stature of the takhi is short with a short neck and a relatively large head (shoulder height: 125-147 cm, weight: 240-300 kg). The coat color ranges from pale yellow to reddish brown, with a white color around the nostrils: the so-called flour nose. Occasionally, Przewalski’s horses have black and white stripes running across their legs.

The short mane standing straight up and the dark dorsal stripe that runs along the back to the tail are striking. Due to the elongated dock the long, black hairs begin to grow only toward the bottom of the dock and not at the base of the tail, as is the case with domestic horses.

In contrast to the 64 chromosomes of domestic horses, the takhi has 66 chromosomes.

The Przewalski’s horse lives in the barren steppes and plateaus of Asia, mostly at an altitude of over 1,000 meters above sea level. The seasonal forays focus primarily on feeding grounds and watering holes. While the takhi can sometimes cover their water needs with snow during the winter, they stay near watering holes in summer.

The Przewalski’s horses are organized in harems and bachelor herds. A harem consists of an adult stallion and several mature females, as well as their offspring. At the age of two, the young stallions are driven out of the harem and usually join a bachelor herd until they can form their own harem or take it from a competitor. The young mares also leave their harem to join other groups.

The respective grazing areas are overlapping and during the fall, 2-4 harems might temporarily assemble into a large clan, which will separate again later on.

The takhi also benefits from the close relationship between the Mongols and their horses. When the first takhi transports reached the Gobi B in the 1990s, many local nomads travelled for several days to welcome the animals to their new home, respectively, their old native country.

Such popularity helps the park administration of the Gobi B to enforce their objectives of protection, whereby not only the Przewalski’s horses will benefit. As part of the umbrella species “takhi”, efforts and measures of the park and the ITG can be bundled, funds can be used in a targeted manner and important wildlife conservation partners can be integrated. The extension of the protected area, which was decided by the Mongolian state in 2019, was a huge milestone in this development.

In September 2016, the “Great Gobi 6 Initiative” was founded at Takhin tal. Since then, authorities, wildlife conservation organizations, representatives of the scientific community and interested private individuals have been meeting regularly in the region of the Great Gobi Biosphere to discuss measures to protect and maintain the Gobi ecosystem and to monitor their implementation.

The “Great Gobi 6” includes the wild Bactrian camel, the Gobi bear, the takhi, the khulan, the saiga antelope and the goitered gazelle. Fortunately, the takhi as an umbrella species has now gotten company. Due to this broader support, further partners can be won and activities can be bundled.

The Przewalski’s horse once belonged to the fauna of the Mongolian steppe. Due to a combination of climatic changes, pasture competition and hunting, the populations were drastically reduced in the last century. In 1968, Mongolia’s last free-living Przewalski’s horse was spotted in the Great Gobi SPA. After that, it was considered to be extinct in the wild.

After various campaigns to capture the wild horses at the turn of the 20th century, some European zoos kept the Przewalski’s horse for exhibition.

In the early 1940s, however, there were only 13 fecund animals worldwide. Thereupon, a stud book was created and selective exchange campaigns between zoos, animal parks and private breeding facilities enabled the species to survive and created the greatest possible genetic variability.

Today, the EAZA Ex-situ Programme (EEP) for Przewalski’s horses still selects the individuals that are to be exchanged between zoos or to be transported to Mongolia based on the stud book. Worldwide, there are currently around 2,500 takhi living in zoos and in the wild.

The reintroduction of the takhi into its ancestral habitat started in the mid-1980s. The International Takhi Group (ITG) has been running a successful reintroduction project in the Great Gobi B SPA since the first transport in 1992: track the milestones of the reintroduction here (PDF).

Population development in the Great Gobi B

Despite initial setbacks due to diseases such as the piroplasmosis and the strangles, but mostly due to the climate phenomenon Dzud with its dry summers and harsh winters, producing compact snow depths of up to one meter (2000/2001 and 2009/2010), the growth of the takhi population in the Great Gobi B is now positive – the takhi is becoming a native species once more.

Since 2011, the Przewalski’s horse has been classified as “endangered” by the IUCN, after it was previously declared as “extinct in the wild” and later as “critically endangered”. However, in order to ensure the long-lasting survival of the takhi population in the Gobi B, the population should comprise at least 1,000 fecund takhi, according to IUCN guidelines.

In October 2020, 320 takhi lived in the Great Gobi B, 56 of them are foals. They distribute in 23 harem and 3-5 bachelor groups. The most important challenge for the survival and further development of the takhi population is the integral protection of the entire Gobi Biosphere Reserve as well as its neighboring areas in China and Kazakhstan.